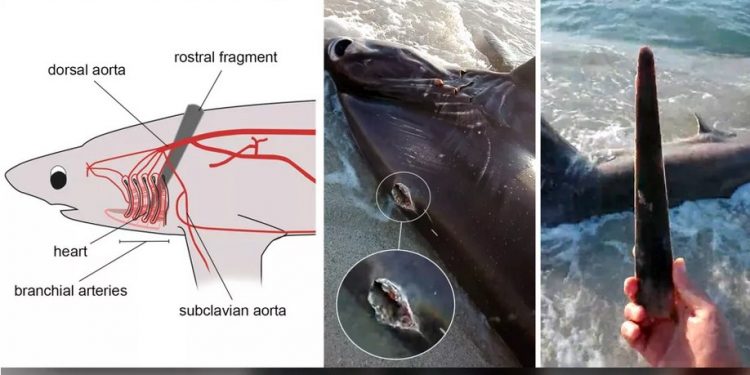 A dead thresher fish was found dead onshore recently with a deep sword stab, Livescience reports. When the stabbing sword was analyzed, scientists found that a swordfish was responsible for the kill. While there was no one present during the attack, it seems like both animals were seeking prey when they turned on each other.

A scenario was thought out by Patrick Jambura of the Department of Paleontology, University of Vienna. He said when in the ocean depths, both predators might have clashed when seeking fishes or squids to go after.

While one scenario paints the case of two animals struggling for territory, another situation points to a swordfish that might have unintentionally stabbed the shark and left a part of its sword in the shark.

No one would have known the outcome of this fight until the dead shark, which measured almost 15 feet, washed up the shores of the Mediterranean Sea in Libya during the early part of the year.

Swordfish are not some species that can be intimidated. They have been known to stand up to other animals that have sought to encroach upon their territory or snatch their prey from them. They have defended themselves from whales, sea turtles, and even submarines. It was reported in 2015 that a diver lost his life at Honokohau Harbor after an encounter with a swordfish. The swordfish impaled him with its long upper mouth at his upper chest.

This will be the first documented case of a swordfish causing a devastating fatal injury to a shark. Maybe this may have happened numerous times under the ocean, but experts are unaware of how many times this may have occurred. This is primarily due to the fact that when dead, sharks sink to the bottom of the ocean where they are buried or become food for other fishes. So, except it happens that they are brought to the surface like this, no one will know about it.

The swordfish did not leave the encounter wholly the same – it sure lost its sword. However, scientists are sure that the fish did not lose its life. Many cases abound of situations where badly injured swordfish survive fatal attacks.

Hubble Telescope Captures Unique Asteroid that is 70,000 Times Richer than the World