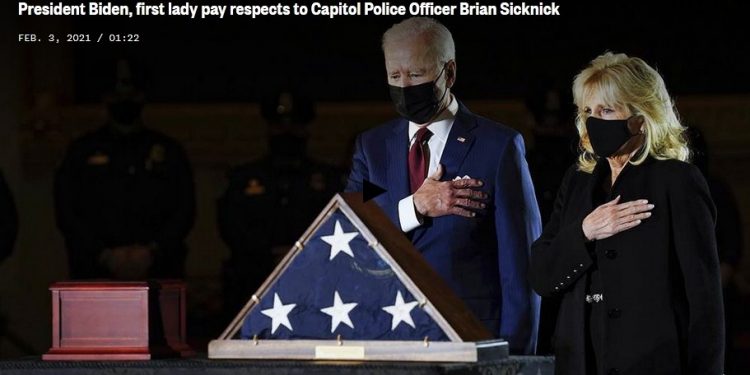 Brian Sicknick, Capitol Police Officer who suffered a fatal blow to the head during the Capitol riot of January 6 has been given a lying-in-honor ceremony at the Capitol for his sacrifice towards upholding constitutional proceedings. Sicknick’s body was cremated and his remains were taken to the building on Monday where it remained during the night for other officers to pay their final respects.

President Joe Biden and his wife attended the ceremony to honor the fallen hero. House Speaker Nancy Pelosi flew a flag over the building to honor Sicknick’s sacrifice, according to a plaque on the flag’s frame. The event will extend until Wednesday when lawmakers will pay their tribute to the late officer. The heads of the two chambers, Pelosi and Majority Leader Mark Schumer are expected to give a speech during the ceremony.

Pelosi and Schumer earlier released a statement to pay their tribute to the fallen hero. The lawmakers also prayed for the bereaved family in the statement.

According to authorities, Sicknick was hit on the head with a fire extinguisher on January 6 during the riot, and he sustained grave injuries that later took his life. The mob stormed the Capitol building that Wednesday to stop the counting of votes and possibly overturn the outcome of the November 3 presidential election. The officer was 42 years old when he died.

For his role in what is now being described as inciting a mob against US constitutional proceedings, former President Donald Trump faces an impeachment trial that could end all of his privileges as a former President of the United States. Apart from Sicknick, four other people died during the riot.

Brian Sicknick joined the Capitol Police about 13 years ago, before which he was a New Jersey Air National Guard troop. On the day of the riot, Sicknick was hit on the head, and he managed to make it to the division office before he fell. He was rushed to the hospital, where he died the following day.

The lying in honor ceremony has only been given to five private residents, including Sicknick. An evangelist, a civil rights advocate, and two other officers of the Capitol Police have been the only other four people in the history of the United States to receive the honor. Sicknick’s ashes will be taken to Arlington National Cemetery, the officer’s final resting place.

The bereaved family has also released a statement to thank members of the public, Sicknick’s former colleagues, and heads of the Congress for their support.